With a driving drum-corps battery, taiko drummers and an arsenal of electronics, the 57-member art collective’s live performances invite audience members to join into an experience of radical, transcendental musical celebration through dance.
Lauded as one of today’s most unique musical performance groups, itchy-O awakens the senses, tests assumptions, and creates an opening for new experiences where identity and boundaries surrender and disband.

Itchy-O was selected to act as a centerpiece at MONA’s world renowned Dark MOFO fest in Tasmania in 2016, has played with David Byrne, and are the darlings of Austin’s prestigious film festival, Fantastic Fest, performing there three years in a row. They have opened for DEVO, Beats Antique, Melvins and have performed at The Biennial of the Americas, Tucson’s All Souls Procession Festival, Scoutmob’s Halloween bash in Atlanta, Austin’s Art Outside, Adobe’s Effective UI, along with regular coast-to-coast touring across the United States. Annual Hallowmass, Sci-Fi Masquerade, and New Year’s Eve bashes have become historic sold-out Colorado traditions.

Itchy-O is also committed to providing spectacular free public performances in non-traditional settings for unsuspecting audiences. These guerilla-type “crashes” are organized clandestinely with participating locations both regionally and across the globe.

Strange times call for stranger measures. Enter Denver’s resident arbiters of the unsettling: the supremely underrated itchy-O, and their COVID compromise, “SYPHERLOT” — a drive-in sound bath. With concerts as we knew them held in perpetual limbo, the 50 plus-member unit created a bedlam baptism of the most bizarre proportions, perfect for summer nights teetering on the edge of the apocalypse. With their masked appearances more pertinent than ever, and the necessity to adhere to the circumstances of the present day and age, the sizeable cohort took a draconian approach and created a masterful show that was nothing short of a dark deliverance.

Itchy-O began as an experimental solo project when the first primordial album, Pulmonic, was recorded and crafted from layering animal heart noises found on an instructional veterinarian vinyl record . Since then, it has blossomed into the 50+ member performance group it is today. Burn the Navigator and From the Overflowing were later recorded and released on famed punk rock label, Alternative Tentacles, and hundreds of performances have followed. The performance troupe is deeply influenced by the visual vocabulary and shamanistic psycho-magic of Alejandro Jodorowsky, the writings of Robert Anton Wilson, Phil Hine, JG Ballard, Peter J. Carroll, Aleister Crowley, Carl Jung, the archeology of Sir James G. Frazier, the Master Musicians of Joujouka, J.G. Thirwell, Talking Heads, Einstürzende Neubauten, DEVO, the Residents, and the immersive performance styles of acts like Crash Worship.

Itchy-O creates transcendent musical experiences by blending many cultural iconographies in an effort to provide a distinctive offering that dissolves familiarities, awakens possibilities, and employs the true nature and power of hive-minded ceremony. With a performance troupe of over 50+ musicians, dancers, puppeteers, and special effects experts, itchy-O creates a space where the performer and audience co-create an ecstatic artistic experience. Shaking all tenants of tradition, the percussive rhythms of the drum battery and taiko drums intermingle with unique custom-crafted electronic devices, providing a primal-futuristic spiritual immersion.

Societies today largely choose what to see, hear, and believe. Our lives are carefully curated and programmed by ourselves and outside influences. Itchy-O challenges that hierarchy of choice and control by inserting its one-of-a-kind creative chaos. We invite our audiences to embrace mystery by passing between knowing and unknowing, self and other. Performances create a temporary community of co-creators who surrender control as observers to become a part of manifesting a shared artistic experience. 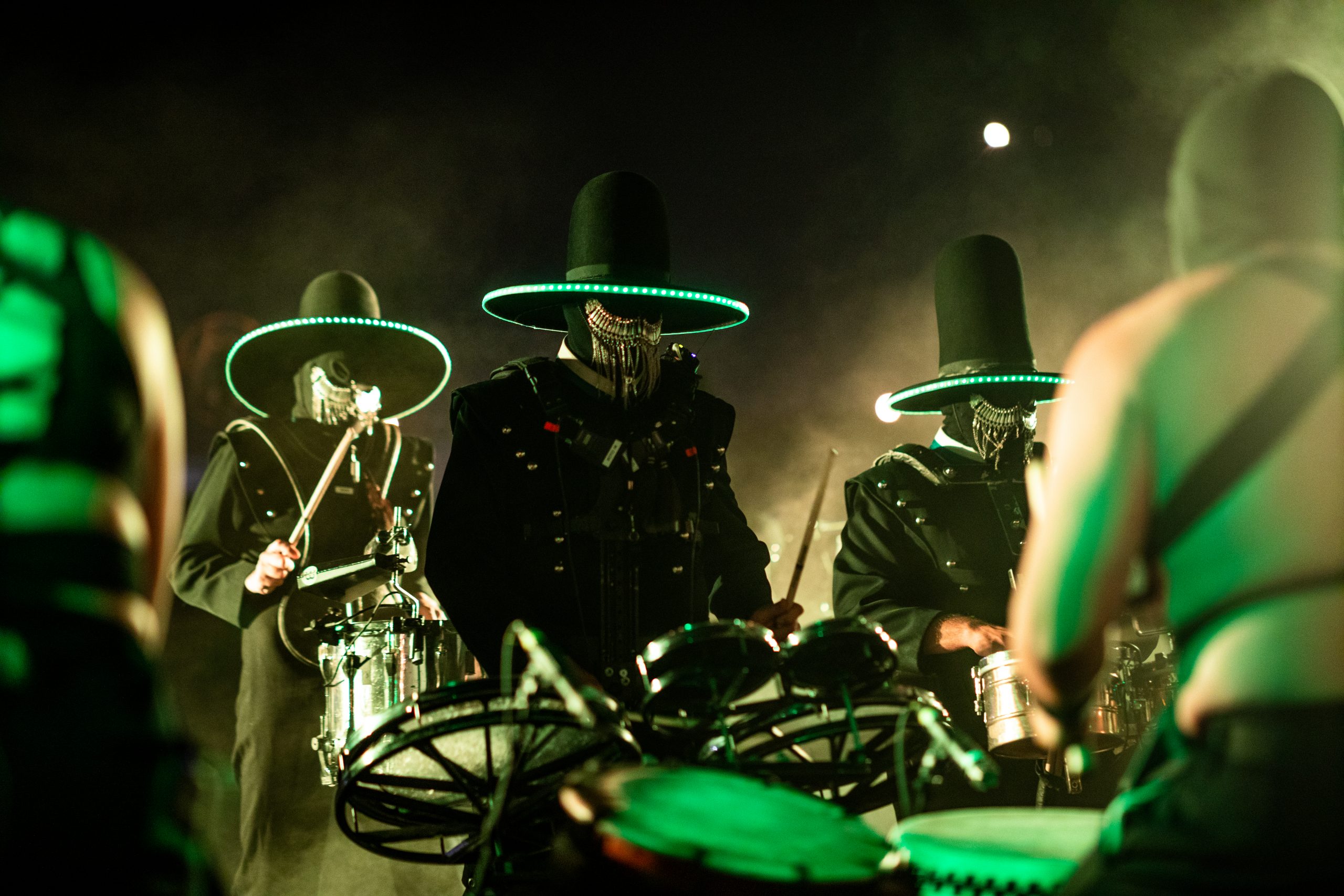 “Denver electronic percussion collective itchy-O appear from nowhere and stir the room into a cacophonous, demonic riot – then disappear just as suddenly.”

“Itchy-O… sounds like Blue Man Group if it were infiltrated by satanists and members of Sepultura.”

“(They) tore down the third wall — and the fourth, and the fifth — in an all-enveloping performance that aimed to elevate the conscious mind. Think 21st-century drum circle, where cyborg bulls are slaughtered on the altar of Mystery Science Theater 3000.”

“What the fuck just happened?… Denver’s itchy-O is the future of showmanship — or at least what it should be. There’s truly nothing like the crowd involvement that the group provides, basking in originality and a refusal to abide by the norms of live music.”

"It's kind of like the ultimate punk-rock, rhythm booty shake. When the drums start hitting, you have to move."

Like an Appalachian tent revival performing a Day of the Dead ceremony in the year 2500, itchy-O’s live performances have become infamous for a kind of digital spirituality, a bone-shaking sensory experience of complex instrumentation and feverish exigency.

I feel like I’m bearing witness to a secret cult ritual.

The music itself spanned the rhythms of war, screeches of madness, bleating goats and demonic incantations; it was noisy and hallucinatory, a highly orchestrated wildness. 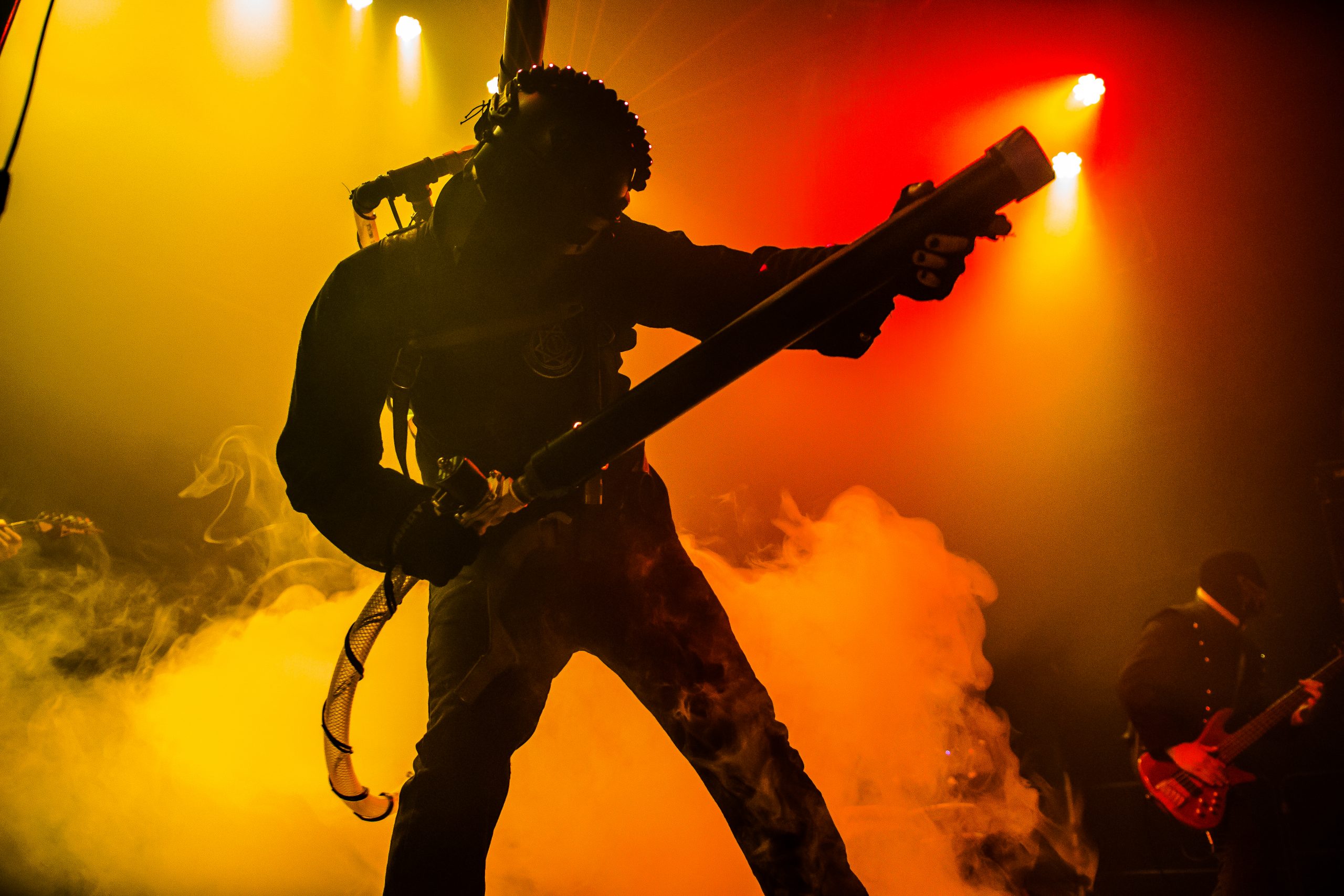 What the fuck just happened?… Denver’s itchy-O is the future of showmanship — or at least what it should be. There’s truly nothing like the crowd involvement that the group provides, basking in originality and a refusal to abide by the norms of live music.