Interested in learning more about itchy-O, viewing our electronic press kit (EPK) or booking a show? 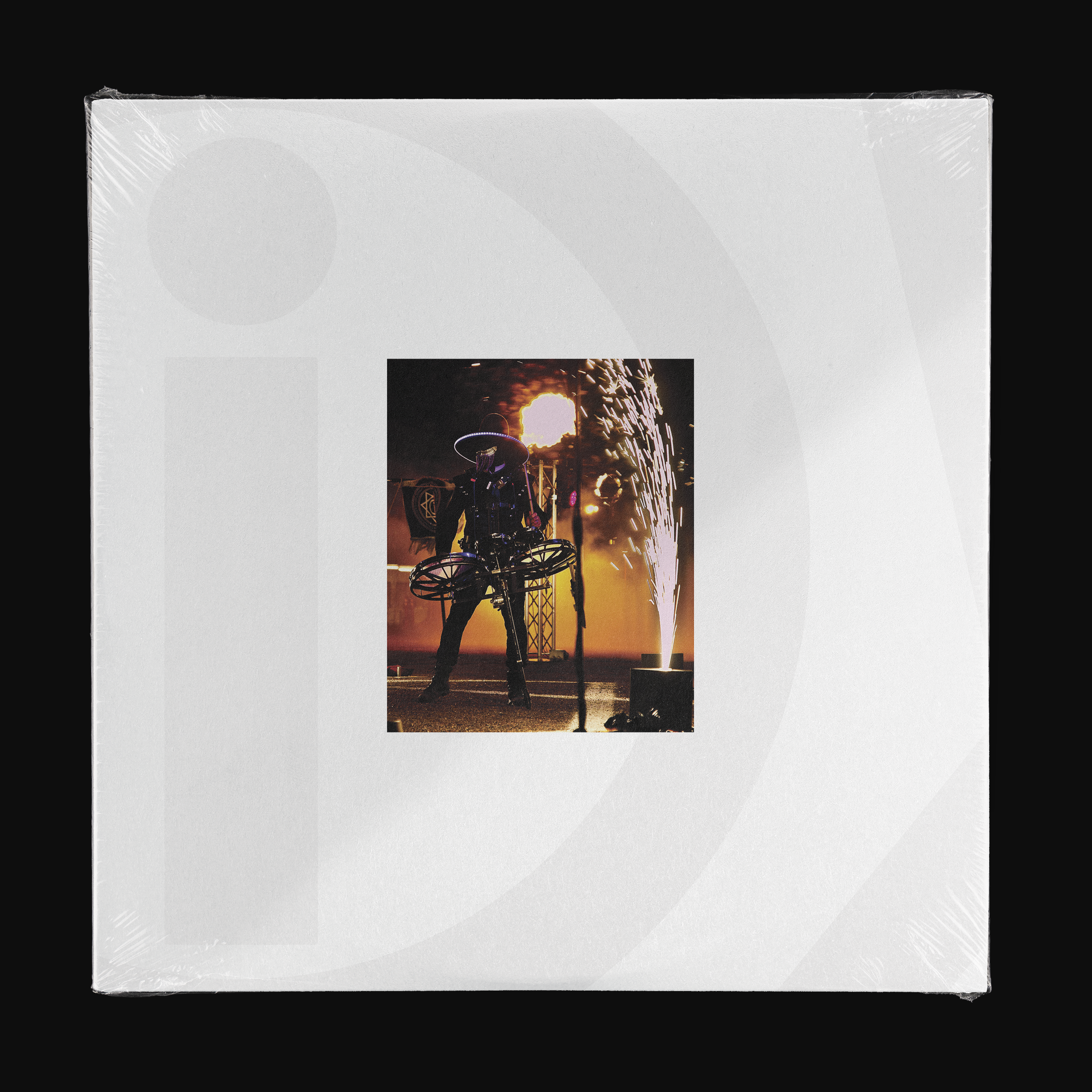 Reopen the portals of escapism and exaltation with this evidentiary double live album out on Alternative Tentacles.

Set in an expansive parking lot at Denver’s Mission Ballroom, SYPHERLOT exploded to life during a time when any/all live music had been sequestered to digital platforms. Itchy-O blew collective minds and blanketed attendees in a cloak of fire, noise, and rhythm, eviscerating old (and new) ideas of entertainment, rewriting the book on what could be achieved at a socially distanced drive-in performance.

This series of spectacle and offertory shook the now-demolished New Tech Machinery building to its foundation during this most hallowed time of year. As the group’s tradition entered its seventh year, artifacts, momentos, and representations were collected on trays from attendee vehicles and later burned in an after-ceremony to honor impermanence and the loss felt so heavily in 2020.

This album is a documented record of those moments, a snapshot of the resulting sacraments ushering in a rapturous sonic bath of transcendental unifying magic, etched now and forever in very polyvinyl chloride, and simulated digitally to download. 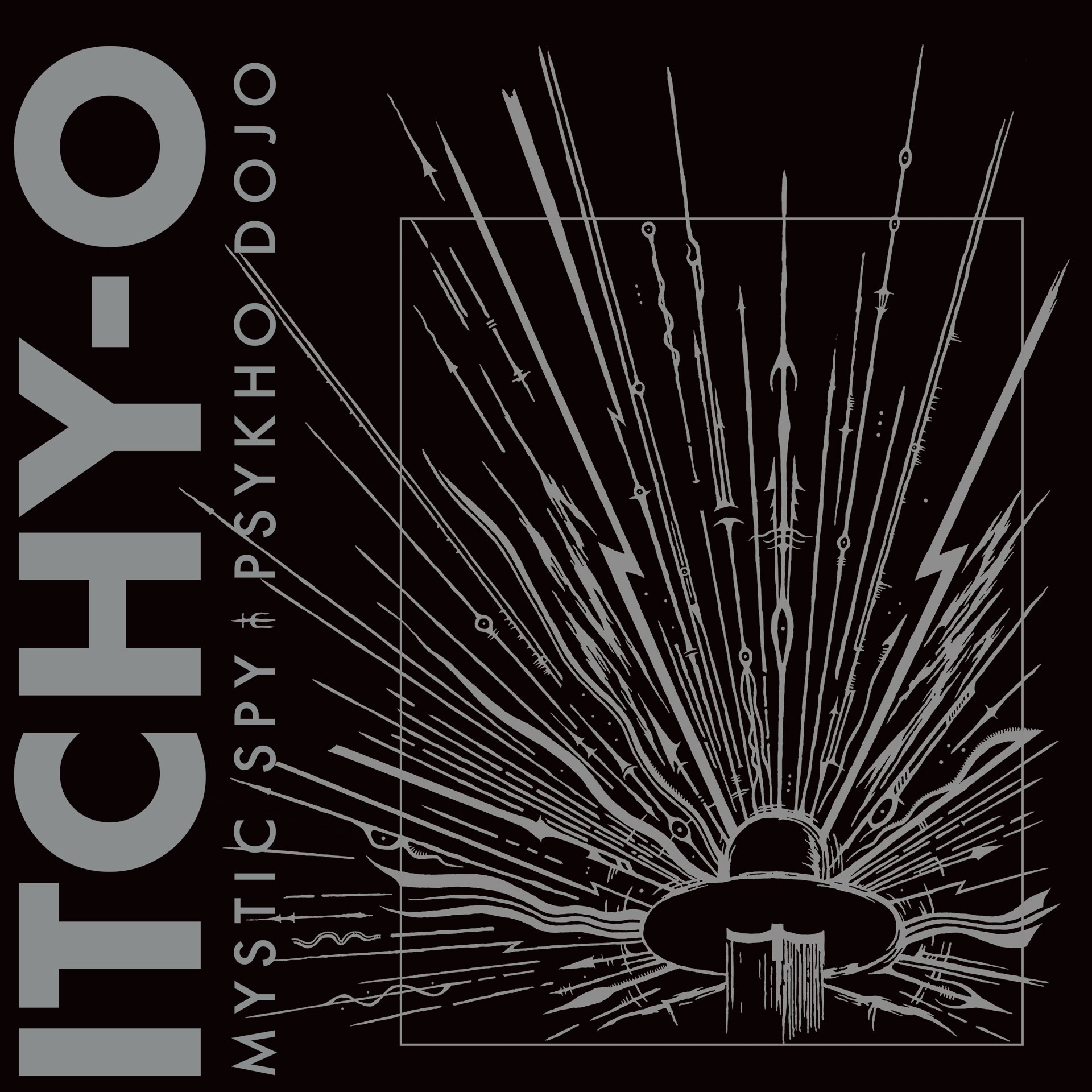 With 26 musicians and well over 100 tracks on many of the songs, the self-described “savagely sophisticated” experimental orchestra has completely outdone themselves. Along with the seven tracks on the record there are seven 32 second short vignettes that all end in lock-grooves on either side of the vinyl. And as if this is not enough, they have also released, along side of the vinyl, a zine publication titled Idra & Scepter. Once you have figured out the puzzle inside this zine, you can log in to an interactive site that allows you to not only listen to the digital version of the lock-grooves but also layer, record, and download your own versions. – METTLE STUDIOS 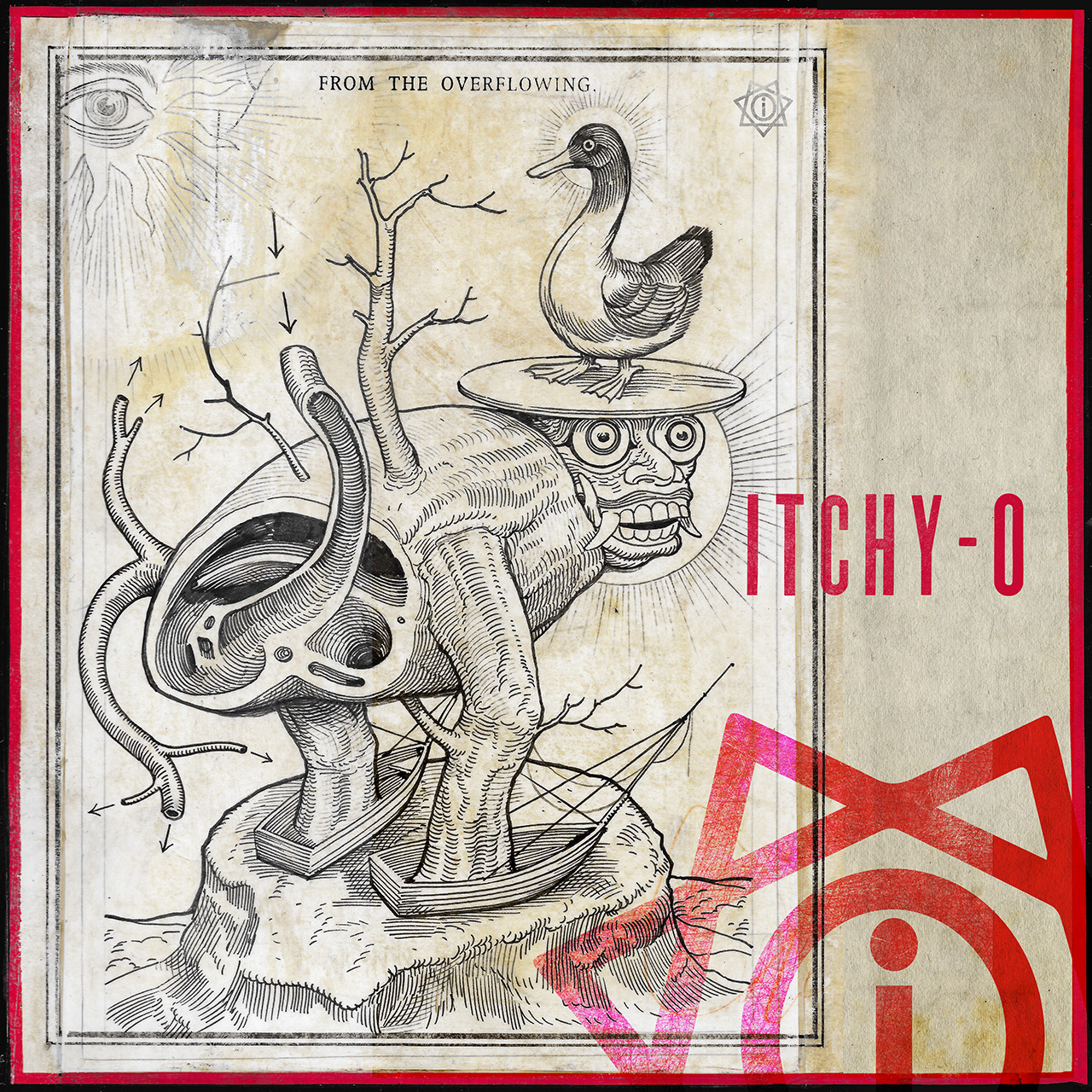 “From the Overflowing” is the follow-up album to the full-length debut “Burn The Navigator” which was released by Alternative Tentacles in 2014. This new release is charged with the same sonic fury of their live shows delivered by a driving drum corps battery and taiko drummers alongside Spaghetti Western guitar licks, snake-charming bass lines, and a rich arsenal of dark electronics including synthesizers, theremin, and vocoders. Itchy-O completely engulfs and immerses its audience from every angle in a pounding electric bog of music and ephemera. While these itchy-O events are legendary, this well-produced record stands on its own and is sure to be a mind-bending auditory voyage of experimental splendor. – ALTERNATIVE TENTACLES

T From the Overflowing T-Shirt $

T From the Overflowing T-Shirt $

Based in the United States, itchy-O has brought its dark, mystical, sweat-drenched shows to audiences across the globe since 2009. Propelled by a massive rhythm section of over 14 drummers along with an orchestra of other instruments; guitars, synthesizers, theremin, vocoders, and other custom-made sonic devices, and an ensemble of technicians and provocateurs, their performances are lauded as a wholly immersive, musical experience of magnificent proportions. .

Itchy-O engagements are all encompassing ceremonial events that engage audiences from every angle in an electric bog of music, ephemera, and spectacle. The group disrupts traditional concert protocols with a powerful form of magic and chaos that awakens the senses, tests assumptions, and creates an opening for new experiences where identity and boundaries surrender and disband.

Itchy-O was selected to act as a centerpiece at MONA’s world-renowned Dark MOFO fest in Tasmania in 2016 and is thrilled to be invited back to perform again in 2023. They have played with David Byrne & St. Vincent, JG Thirwell, Magic Sword, performed on bills with Iggy Pop, Dan Deacon, Bad Religion, and Public Enemy. They have opened for DEVO, Beats Antique, The Melvins and have three albums released on Jello Biafra’s famed record label, Alternative Tentacles.

Itchy-O is also committed to providing spectacular and spontan They in delivering engaging and mesmerizing art to the streets by prviding spontaneous musical encounters in non-traditional settings for unsuspecting audiences through these guerilla-type performances.

With a driving drum corps battery, taiko drummers, an arsenal of electronics including synthesizers, theremin, vocoders, and other custom-made sonic devices, itchy-O completely engulfs an audience from every angle in an electric bog of music, ephemera, and spectacle. Lauded as one of today’s most unique musical performance experiences, the group disrupts traditional performance protocols with a form of chaos that unifies spectators and audiences. Itchy-O performances awaken the senses, test assumptions, and create an opening for new experiences where identity and boundaries surrender and disband.